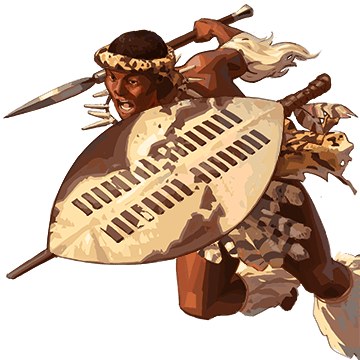 Swiftly closing on the enemy, the impi engage in ferocious hand-to-hand combat and revel in fighting better-armed adversaries.

During his reign, Shaka (1816–1828) formed a semi-permanent army whose tactics and equipment he revolutionized, turning it into a formidable instrument of conquest. In Zulu, the term Impi refers to combat and by extension to a regiment of warriors made up of approximately one thousand men. In these regiments, all soldiers wore the same uniform and carried the same equipment. The javelin was considered insufficiently lethal and was replaced by the iklwa, which had a shorter shaft and wider blade, along with a club (knobkierrie), both used in hand-to-hand combat. Warriors also carried a long, woven shield for protection. These new weapons were accompanied by revolutionary changes in battle strategy. Regiments adopted a “buffalo horn” formation designed to surround and crush the adversary, the objective being no longer to make the enemy flee, but to annihilate them.