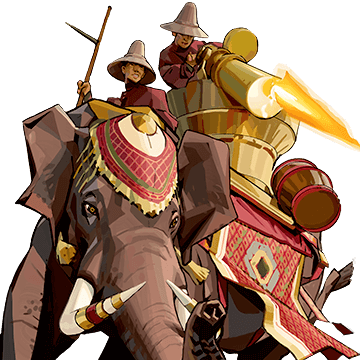 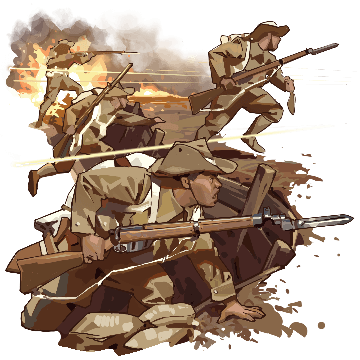 Armed with a deadly machine gun, this elephant's war cry is accompanied by the staccato clatter of weapon fire.

Sweeping administrative reforms in Siam were a means of asserting the strength and independence of the kingdom against a background of regional disputes. A steady increase in crown revenue in the late 19th century helped finance a permanent modern army and maintain national unity and independence in the face of British and French colonial ambitions in the region. To these ends, in 1859 Chulalongkorn created a regiment of the royal guard, (which served as a blueprint for modern Thai armies), organized, trained, and equipped on the model of the English infantry regiments. However, there was little room for infantry maneuvers in the numerous conflicts that took place in the mountainous jungle regions in the west of the country, and as a result elephants were introduced to carry the army’s Gatling guns and cannons. The white elephant was a prestigious symbol of the monarchy—notably featuring on their coat of arms—and was the central element on the national flag between 1820 and 1916.