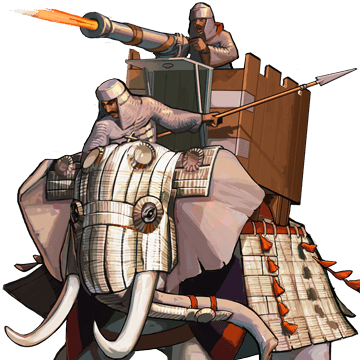 Gunner
Ranged-combat Unit. Fights at full Combat Strength even when defending against close-combat attacks.
Move and Fire
Can perform a full move after making an attack. 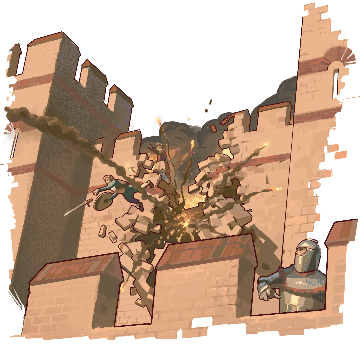 With artillery mounted on the back of the elephant, the gajnal is a swift, terrifying addition to Mughal forces.

As the leaders of an empire with roughly one hundred million subjects, the Mughal sovereigns were able to gather immense armies for their military campaigns. Aside from the troops maintained by the imperial authorities, mainly located in the cities, ports, and trading routes, the emperors could also call on troops from vassal states, who maintained order during their campaigns. The Indian subcontinent was already densely populated in the 16th century: the Mughal Empire ruled over approximately 120 cities, 3200 market towns, and 17 million inhabitants. This made the use of artillery even more crucial in order to accelerate the conquest of urban areas. Seventeenth century progress in the preparation of gunpowder and the design of cannons led to the development of gajnals. These were a pair of culverins mounted on a platform harnessed to the back of an elephant and controlled by two soldiers. A Mughal army on campaign sometimes had more than 500 of these units.