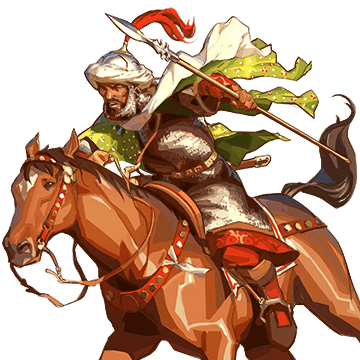 Recruited outside Arabic tribes, these guardsmen of governors and royal family are elite light cavalry of the caliphate.

Established under the caliphate of Mu'awiya (661-680), the Haras was a contingent devoted to the protection of the rulers and governors of the Islamic Empire. Members of this personal guard accompanied the caliph during public ceremonies where his power was put on display. This corps at the center of power also acted as a police force directly attached to the caliphate's authority. The troops were drawn from the population of mawali—Muslims from conquered provinces who were non-Arab converts. By keeping these dependent followers, Umayyad rulers hoped to prevent the influence of internal palace plots within their personal guard. The Haras were sometimes integrated into the imperial army during times of war. In this case they formed a highly mobile force of 500 light cavalry that excelled thanks to its great speed of execution.