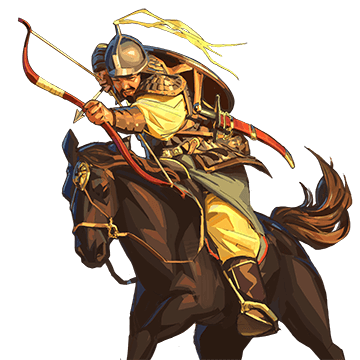 Nomad
Special unit that gathers Food in order to multiply.
Multi-Move
Can move until all Movement Points are depleted, ignoring zones of control.

Swift to Battle, the Mongol hordes thunder across the vast steppes, terrifying enemies and pillaging cities.

Although foot soldiers—mainly foreigners—were gradually incorporated into the army ranks during campaigns, the Mongol army was first and foremost an army on horseback. The strength of the Mongol army came from its incredible mobility on the battlefield, but also on campaigns. This mobility was emphasized by the fact that each rider had several horses, which meant they could travel great distances without having to rest their animals. The grand imperial army was created in 1206 under the command of Genghis Khan. Serving as both a basic administrative structure and an instrument of conquest and maintaining order, it was organized in a decimal system. The tumen was a unit of 10,000 men whose commanders were often members of the Grand Imperial Council. With minimum logistics, the army lived mainly from pillaging in the regions it crossed, but also from the herds that accompanied them.