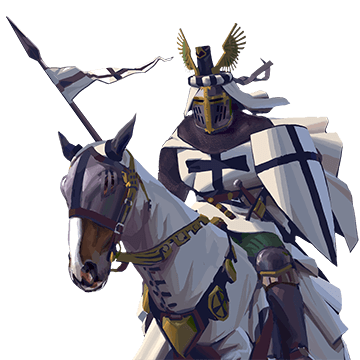 Clad in chainmail and armed with the traditional lance and sword, the Teutonic knights ride to Battle on powerful Friesian horses.

Created by the merchants of Bremen and Lubeck during the Siege of Acre (Levant) in 1190, the Teutonic Order started as a Hospitaller order intended to assist the Christian pilgrims. It was only in 1198 that it was transformed into a military order with recruitment occurring primarily among the German nobility. Under similar rules to the Templars, it was headed by a grand master who was appointed for life, and who was under the authority of the German Emperor. The rise of the order and the expansion of its European territories began under the influence of Hermann Von Salza (1209-1239), through the Christianization of pagan populations in eastern Europe. The Order then seized substantial portions of these territories (Prussia, Pomerania, Lithuania, etc.) and established its capital in Marienburg. The power of the Teutonic Knights declined, however, during the 15th century following defeat at the Battle of Tannenberg (1410).