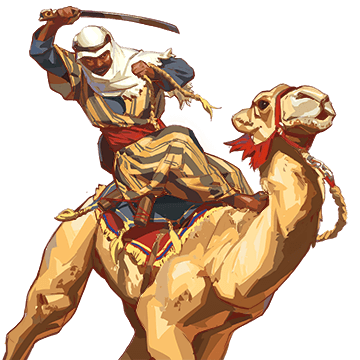 Though crude and ungainly, camels are also hardy and tireless, making them effective light cavalry.

Known for its endurance, the dromedary can withstand high temperatures, go without food and water for eight to ten days, and carry loads of up to 200 kilos. These unusual abilities made the dromedary the animal of choice in Sahelian societies for both transport and combat. The kings of Ghana may have preferred to add territories to their empire through negotiation, but they also knew how to employ their military power in order to extend their influence and keep trading routes open. They could rely on an experienced warrior aristocracy, which traditionally commanded the cavalry, and on several slave armies. To maintain their strategic control of the city of Aoudaghost, the kings of Ghana mobilized armies composed of many mehari dromedary soldiers. The mehari were used to transport supplies over long distances or to attack the enemy and were usually ridden by non-noble freemen or slaves.