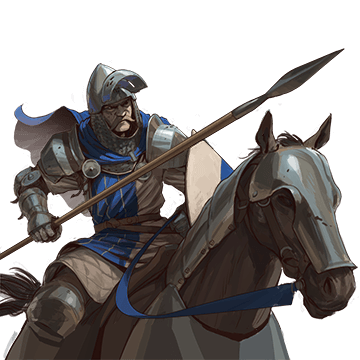 These loyal knights, famous for being heavily armored and riding heavy horses, are the strike force of the Frankish armies.

The Kingdom of the Franks grew by granting the management and exploitation of fiefdoms to a small group based on military merit. This group of warriors (who became nobles) was characterized by its military specialization and formed an essential link in feudal society. Over several centuries, the Frankish nobility created an image of itself that served as a model. In this common culture, based around the image of the knight and companionship in battle, a complex system of values infused with Christian references was added. In fact, medieval military tactics would glorify the cavalry up until the mid-14th century. Dressed in heavy armor, carrying lances three meters long prolonged with a sharp iron tip, the Frankish nobility would often charge in tight formation during battle. This maneuver, which relied on brute force and shock, became less effective over time when facing companies of archers and finally arquebusiers.