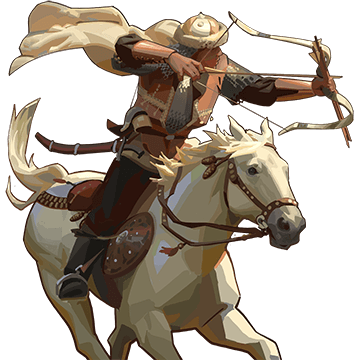 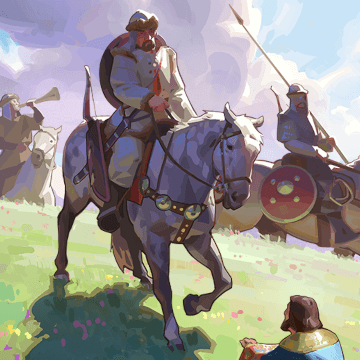 An ancestral knowledge of horseriding gives these mounted fighters remarkable ease with bow and arrow.

The Madara Rider rock relief was carved into a rock wall located southwest of the mouth of the Danube River in the eighth century. It depicts a traditional hunting scene — a very common image in Eurasian cultures — and clearly illustrates the proto-Bulgarians ' strong links with the Persian and Turkic worlds, and the semi-nomadic, equestrian lifestyle of the steppes. Another sign of their connection to the Turkic world can be seen in the honorific title, bagatur, which was used by the warrior elite during the First Bulgarian Empire. The title is associated with the image of a heroic knight, and was used to refer to members of the warrior nobility, the bagaturi, traditionally attached to the cavalry in Khan armies. Between the eighth and 10th centuries there were significant developments in military strategy, and an increasing use of heavy cavalry troops. Despite this, mounted archers and composite bows continued to be a feature of Bulgarian armies long after this period, due to the regular incorporation of Pecheneg units.