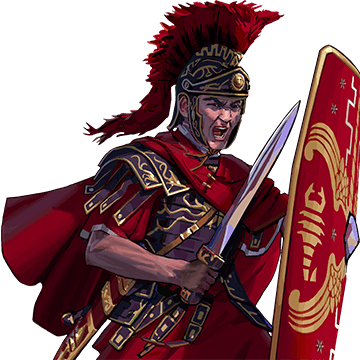 Initially the bodyguards of generals, the praetorians have evolved from a strong military melee unit into a political force.

In the Roman Republic, the Praetorian Guard was the army unit responsible for protecting generals during military campaigns. Increasingly long service periods for the military during the civil wars of the 1st century BCE drew out the existence of this unit to the point where it was made permanent in 27 AD, during the reign of Augustus. The troop consisted of 5,000 men divided into nine cohorts. They were placed under the Emperor’s direct command and received important privileges: better equipment, better pay, a shorter military service period, and often tax-free land at the end of their service. Stationed in Rome, where they were the only citizens allowed to bear arms, they came to play a decisive role in intrigues regarding the succession in Imperial Rome.