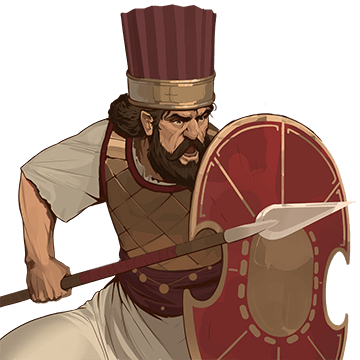 Both imperial guard and elite heavy infantry, the well-equipped immortals are the backbone of the Persian army.

The immense armies that the Persians were able to assemble had a profound effect on their contemporaries. Their bloated ranks (though largely exaggerated by Herodotus), included an elite unit of 10,000 soldiers called the Immortals who served as Xerxes the Great’s personal guard. These guards were recruited from the Persian population of the empire and formed the backbone of the army. This elite infantry unit fought with lances, a symbol of the Achaemenid aristocracy. According to Greek historians, the Immortals were also recognizable by the gold or silver badge on the butt of their lances. On the battlefield, they supervised other troops of conscripts sent by the satraps and mercenaries recruited for the campaigns. Their name, the Immortals, may come from the fact that each soldier killed in battle was systematically replaced, which meant that the number of troops in this corps was kept at a constant level.