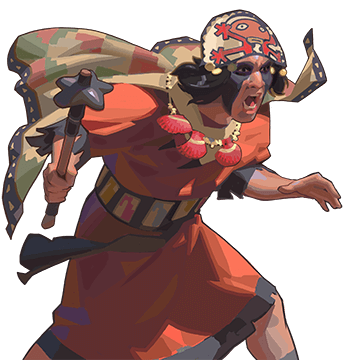 Melee
Close-combat Unit.
Shared Ardor
When this Unit destroys an enemy in battle, it inspires all its allies and provides them with an Ardor bonus.

Beheading fallen enemies, Headhunters claim their foe's vitality for their own, while renewing the land's fertility.

Among the Nazcas, large numbers of iconographic representations bear witness to the practice of ritual decapitation. These images are particularly visible on their ceramics and, indeed, the practice is abundantly confirmed by archaeological findings. More than a hundred skulls have been unearthed – sometimes in the same place, such as the Cerro Carapo site, where 48 skulls were discovered in the same cache.
For the most part, these skulls have undergone modifications and some were mummified. For example, a hole bored through the forehead allowed a rope to be passed through and the severed head to be hung up or even tied around a warrior’s waist.
The precise significance of this practice still evades us. Nazca iconography supports the widely accepted understanding of trophy heads intended to demonstrate the warrior’s skill in battle. However, this usage seems to coexist with a variety of ritualistic functions related to death, fertility, and regeneration.