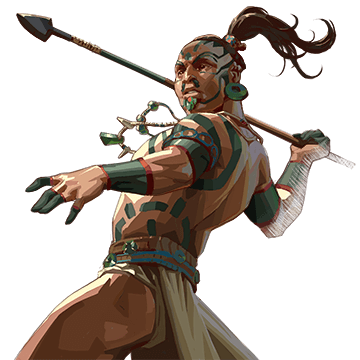 Ranged
Ranged-combat Unit. Receives a penalty to its Combat Strength when defending against close-combat attacks.
Poison
Applies a poisoned status to the target, which reduces its Movement Speed and Attack Range.

Thrown spears can be formidable short-range projectiles, and poison makes them even deadlier.

While bows were also used during the Classical period, the spear and javelin remained the Mayan warrior’s weapon of choice. Indeed, recent archaeological discoveries, particularly those on lithic materials, tend to indicate the predominance of weapons designed for close-combat fighting and “short-range” weapons. Spanish sources from the period describe the amazement of their own soldiers at the power of these weapons that were capable of piercing armor. The javelins used by the Maya often had an obsidian point and were perhaps sometimes dipped in an animal- or plant-based poison to make them more deadly. While traditionally used for hunting or warfare, artistic representations show that the atlatl—which in the nahuatl language later referred to a javelin-throwing device—was for the Maya more a symbol of power associated with nobility.