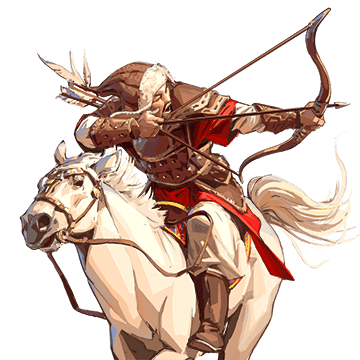 Nomad
Special unit that gathers Food in order to multiply.
Multi-Move
Can move until all Movement Points are depleted, ignoring zones of control.

Nomads with fast horses and light but powerful bows, the Huns are adaptable and dangerous.

Like the people of the steppes, the Huns’ military superiority came from their unusual mobility, a heritage of their nomadic lifestyle. As a result of pillaging and contact with other populations, their weapons were partially Romanized (albeit gradually) though the composite bow remained their preferred weapon. This asymmetrical bow was shorter at the bottom to make it easier to shoot on horseback. The use of this bow was facilitated by a more stable, rigid saddle whose high arch mitigated the lack of stirrups--a feature they only adopted at the end of the 6th century. On the battlefield they excelled in the art of harassing their enemies in masterfully coordinated attacks and retreats, rounded off with heavy cavalry charges. Although their horses were smaller than those in Europe, they had better endurance and could maneuver over greater distances.