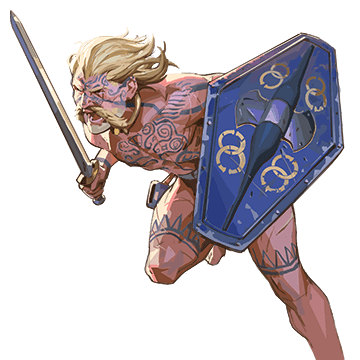 Powerful warriors, the gaesati are also famous for fighting naked.

Gaesati, Latin for “the men armed with gaesum”, refers to the traditional Celtic lance these warriors carried. They were also typically equipped with large shields and iron longswords. Known for their skill as blacksmiths, Celtic craftsmen also produced bronze helmets and chain mail. The term Gaesati has come to refer to all Gaulish mercenaries from the Rhone Valley and the Alps, who fought the Romans when they colonized the north of Italy in the 3rd century BCE. Called in as reinforcements by the Cisalpine Gauls, they distinguished themselves in 225 BCE in the Battle of Telamon, during which, according to Latin sources, they charged at the Roman legions naked. This anecdote may have been used to emphasize a posteriori the inferiority of Gauls compared to their Romans victors.