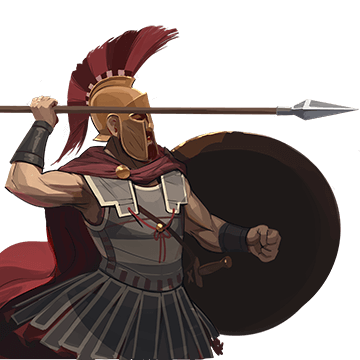 Hoplite spearmen are citizen-soldiers who often fight in phalanx formation for maximum effectiveness.

The “Hoplite reform” brought important changes to Greek military practices at the beginning of the 7th century BCE. The hoplites were heavy infantry units composed of citizens fighting in a phalanx. This formation of tightly packed rows of foot soldiers was an allegory for the close-knit camaraderie that was the basis of these cities' strength. Every hoplite was equipped with a spear at least two meters long and a short sword. The full uniform also included a helmet, a cuirass, and a large bronze shield. This shield was the key to the structure and solidity of Greek phalanx lines. This equipment was paid for by the fighter, so only a minority of wealthy citizens could afford them. Others had to fulfill their military service obligations in light infantry units or as oarsmen in the war galleys.