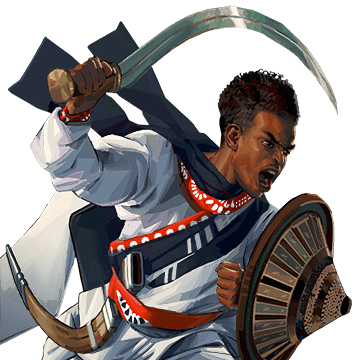 Melee
Close-combat Unit.
Grappler
Has a larger zone of control which cannot be ignored.

The shotelai use curved swords, or shotel, in Battle to help them reach behind enemy shields and other types of protection.

The term shotelai describes a warrior armed with a shotel, a sword that comes from Abyssinia and Ethiopia. Forged in iron, the weapon belonged to a class of sickle-swords that were in widespread use throughout the Nile Valley in the form known as the khopesh. However, the shotel could be distinguished by its characteristic size and shape. The blade curved very sharply from just below the handle. This sword was used with the point forwards, like a large sickle, since only the blade inside the curve was sharpened. We have very little information about how this weapon was actually used, but it was likely an infantry weapon. The curve and tip could have been used to pass behind a shield or unseat a rider. However, it is possible the weapon was merely ceremonial and never actually used in combat.