Melee
Close-combat Unit.
Champion
Stronger when attacking during the first round. 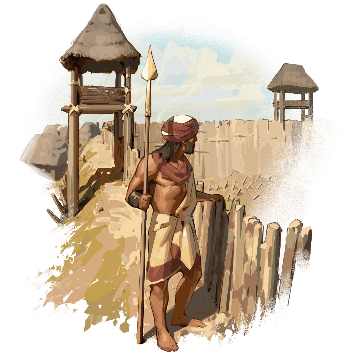 Deriving from Promachomaï, meaning “to fight in front,” the Promachoi are inspired by champions chosen to fight on the front line.

The term Promachoi comes from the word Promachomai meaning “to fight in front” (pro: front; machomai: to fight). In ancient Greek this term referred to the soldiers or champions who would fight on the front line. In the 15th century BCE a new type of combat unit emerged with its own distinctive equipment and martial practices. These soldiers wore bronze plate armor that fully covered them from the top of their shoulders to the hips, along with a helmet and greaves. This gear weighed approximately 15 kilos and indicates one-on-one combat with cutting weapons. The development of this new type of military technology came on the heels of a more widespread use of bronze weapons in the Aegean Sea area.