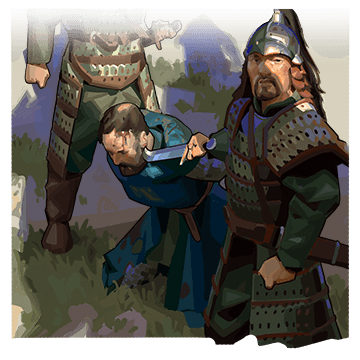 As the last gasps of combat fade on the battlefield, it is clear that the empire’s forces have claimed a decisive victory. The enemy is in retreat, leaving all its captured soldiers behind – and in the hands of your triumphant army. Wounded, subdued or belligerent, these fighters wear the colors of your opponent. What is to be done with these prisoners of war?

No matter where it comes from, more labor helps power the empire. They will work for us.

We have no use for these defeated scoundrels, yet they may not be worthless. Let their families buy them freedom.

The battle is over, but our enemy will never relent. We will not take the unnecessary risk of letting them live.