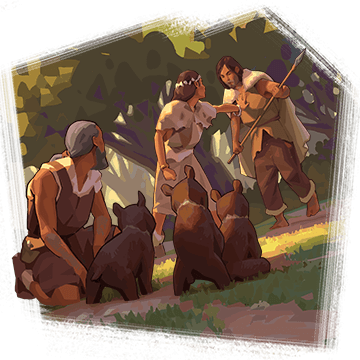 The tribe fought wisely, bravely, and now the dangerous beast lies defeated. As your courageous warriors lay sprawled out, recovering, several of the ferocious beast's young emerge from the nearby brush. One of the warriors strides closer, spear aloft, ready to kill the young for meat, but before he can, two others stop him. The cubs look up, their eyes large and brilliant like moons. The first says he can train the young so warriors might spar with them, become stronger. The second disagrees, saying she can raise them, and make them teach us nature's hidden ways. What is your wish?

Fighting with these beasts could make every warrior in the tribe stronger, more ferocious.