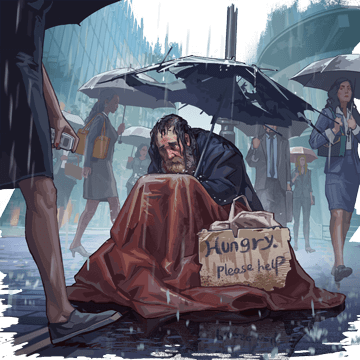 Across the nation, every city has seen a rise in the number of rough sleepers on the streets, but the problem is especially acute in {0}, where the many commercial areas combined with the few industrial districts attract the impoverished. Some cite the profit-above-welfare culture, where low wages paid to many facilitate spirals of poverty that leave some destitute, but others claim the blame lies with individuals. Many feel unsafe. A response is needed. What to do?

Patrols are needed to keep the streets safe from these rough sleepers who only have themselves to blame.

By funding their wages, programs to get the homeless back into the workforce can be created.

Under military supervision, the homeless could help on the empire's many farms.