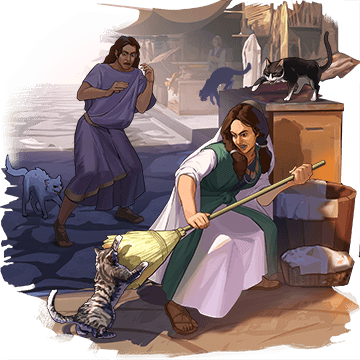 Cats are now used by merchants, common folk and sailors alike to protect food stocks. But they've become too numerous and risk becoming a problem themselves! People could adopt them to regulate their number, or, as butchers suggest, those "unemployed" cats could be slaughtered for meat -- as they do for cows who cannot produce milk. What's your choice?

People might enjoy having them lying around all day...

The meat's modest and stringy, but the commoners aren't fussy.