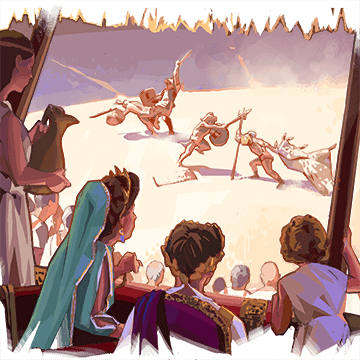 Word has come to you that since slavery has been established, the wealthy citizens of the empire are enjoying a new, brutal, form of entertainment: slaves fighting each other -- or wild animals -- in clandestine fighting pits. Codes of conduct are strict, and fatalities are rare, but already influential voices in {0} are calling the bloodsports barbaric. Others see the spectacles as useful tools of popular control. What is your stance on these entertainments?

For the vast majority, these bloodsports are an enjoyable distraction.

Slaves deserve dignity. Efforts that would've been spent in the pits can be put to better use on farms.

Physical punishments for every city's criminals could include stints in the fighting pits. A stirring spectacle!