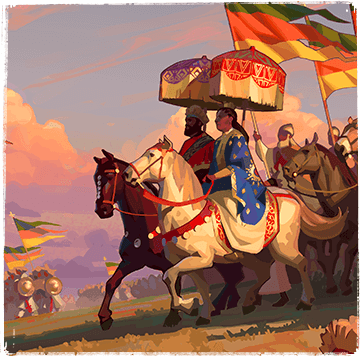 Amba
Count as "
Count as " Commons Quarter"
Is fortified.
Increases the Movement cost of hostile armies within a range of 2 Tile.

With its skilled soldiers and indomitable defenses, progress and power are the twin pillars upon which Ethiopian culture is built.

At the start of the 19th century, Ethiopia was a divided empire whose suzerains only had nominal authority over their vassals, who were competing for control of political power. The restoration period that began in 1855 saw the emperors reassert themselves as heads of the country’s institutions, before obtaining recognition of Ethiopia’s independence on the international arena, thanks to the strength of their armies.

The second half of the 19th century saw sovereigns from the Solomonic dynasty reclaim the Gondar throne and the gradual restoration of imperial rule. Between 1855 and 1913, the reigns of Tewodros II (1855-1868), Yohannes IV (1872-1889) and Menelik II (1889-1913) reestablished the supremacy of the emperors over the Princes of Gojjam, Wollo, Tigray and Shewa, which they gradually managed to place under their rule. As successors of the legendary Menelik I, son of Solomon, these three Negus (Kings) also got to work on the reunification of the Ethiopian church, which had been divided until then by profound theological disagreements.
Driven by the trading boom in the Red Sea, increased attention to tax payments, and the confiscation of agricultural land by the Church, the substantial increase in imperial revenue enabled the Negus to sustain increasingly powerful armies. Trained to European standards by foreign advisors, permanently on call for mobilization and well-supplied, these armies were equipped with up-to-date weaponry and ammunition imported from Europe. It is thought that Menelik II mobilized close to 100,000 men, of which some 60,000 were armed with rifles, during his victory against the Italian army in Adwa in 1896.
The military successes notched up over the Egyptian and Italian armies and the development of relationships with the European powers enabled the emperors to have Ethiopia’s independence recognized by means of a treaty, after having doubled its size in the 1880s.

In the Ethiopian empire, the title ras referred to an important member of the monarchical hierarchy. For example, it was the title given to the nephew of Negus Menelik II, born Tafari Makonnen, (the famous Ras Tafari) before he was crowned emperor under the name of Haile Selassie I in 1930.