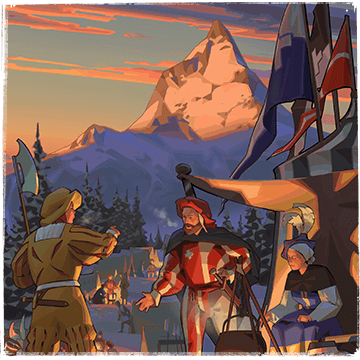 Legendary soldiers, the Swiss are united by a promise to defend their lands – and excel at keeping the peace.

At the end of the seventh century, proto-Bulgarian peoples left the Pontic–Caspian steppe, and settled at the mouth of the Danube River. In these lands, at the northern edge of the Byzantine Empire, they founded a powerful khanate that unified many different Slavic and Turkic-language speaking populations through their gradual expansion into the Balkans. Over three centuries of military successes, they were able to wrest tribute from the Byzantine emperors, establish an independent Bulgar patriarchate, and obtain the titles of Caesar and then Basileus (Emperor) for themselves.

After the Bulgar Khaganate (or Bulgarian Khanate) was founded in 681, it experienced periods of chronic instability and power struggles for more than a century. In the early ninth century, Khan Krum (802–814) and Khan Omurtag (814–831) profoundly reformed the state. After substantial territorial gains in the Balkans and the assimilation of many new populations, the khanate's legal and administrative systems were reorganized. These wider powers enabled the Bulgar rulers Boris (852–889), Simeon (893–927), and Peter (927–969) to continue the khanate’s expansion, and impose Christianity as the official state religion from 864 onwards. Through the creation of a shared judicial, political, and religious framework and the gradual spread of the Cyrillic alphabet and Old Church Slavonic religious texts, a more uniform culture began to emerge in the khanate. In foreign source texts, we can see this process unfold through an increasing use of the adjective "bulgar" to describe the khanate's population starting from the time of Omurtag. From the seventh to the 10th century, the khans took advantage of political and military opportunities to shift the balance of power in their favor against the Byzantine Emperor. Tervel, for example, managed to gain imperial lands and honorific titles after helping to free Constantinople from the 718 Arab forces’ siege. In 816, taking advantage of a Byzantine political crisis, Omurtag negotiated a long-lasting peace treaty accompanied by honors and the payment of regular tributes. In 880, Boris pressured the Byzantine Patriarchate into recognizing the autocephalous status of the Bulgarian Orthodox Church; later, following the Siege of Constantinople in 913, Simeon obtained the title of Basileus or emperor (formally recognized under Peter I).

The Bulgarians enjoyed their most stunning victory over the Byzantines under Khan Krum in 811, which led to the capture and execution of the Byzantine emperor Nikephoros I. The Khan is believed to have had the emperor's skull fashioned into a drinking vessel.