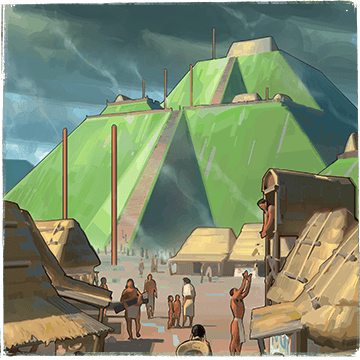 Often settling near waterways, the Mississippians are a spiritual people who draw their strength from the power of their rivers.

The first communities associated with Mississippian culture gathered and established urban centers on the plains of the present-day Missouri in the ninth century CE. Until the 1600s, Mississippians gradually extended their influence over the Southeastern portion of the United States by developing long-distance trade. The breadth of their cultural influence across almost 800 years can be seen in the wide adoption of their construction techniques and typical city layouts.

The Mississippians are inseparable from the chieftaincy system that structured their communities politically, economically, and spatially. Led by chiefs who combined warrior and spiritual functions, these communities were based on the model of Cahokia. This city was both the largest Mississippian settlement and beating heart of its culture and rituals. It is thought that at the culture's peak in the 13th century, the Mississippian territories were home to several hundred thousand people, spread over approximately 50 large chiefdoms and a multitude of smaller ones.
Settled along the Mississippi River and its tributaries, Mississippian populations lived from farming and hunting and gathering. Around their dwellings, they grew corn, beans, sunflowers, gourds, tobacco and, in the winter, gathered nuts and berries as well as hunting deer and turkey. The fishing seasons allowed them to stock up on supplies: the Mississippians caught fish with nets, harpoons, canoes, traps or by poisoning the waterways.
Today, the areas where they settled still bear the traces of their constructions. Earthwork pyramid mounds, a dozen meters high, marked the elite’s residences in the surrounding landscape. Topped with homes made from earthen plaster and thatch, they were characteristic of the Mississippian fortified towns that served as the chiefdoms’ political and religious centers. These urban settlements also included vast rectangular public plazas built at the foot of these mounds.

The Mississippian mounds were the result of a gradual accumulation of layers over dozens of years, rather than a single construction. Each stage involved dismantling the house on top, raising the mound and then rebuilding a dwelling on the new platform.