United under their faith, the Teutons believe they can be a flaming torch that spreads light into the dark corners of the world.

The term “teuton,” which developed into the word “Deutsch” (German), initially referred to an ancient Germanic tribe that was in conflict with Imperial Rome. Later this term was used in a more general sense to mean the German-speaking populations of the Holy Roman Empire, which from the 15th century onward was sometimes referred to in Latin asSacrum Romanum Imperium Nationis Teutonicae (which translates as Holy Roman Empire of the Teutonic Nation), or Sacrum Romanorum Imperium Nationis Germanicae (Holy Roman Empire of the German Nation).

When the Dukes of Saxony seized power in East Francia they gradually put an end to the wars that had been raging in the kingdom for decades. Coronated at Aachen in 936, King Otto I received a second prestigious Carolingian title when he was crowned Emperor by Pope John XII in 962, thus giving birth to the Holy Roman Empire. The restoration of imperial power enabled him (and later his successors) to impose his rule over many of the Carolingian territories and to expand eastward and along the Danube River. When the Roman Empire was reestablished, it only comprised the kingdoms of Germania (East Francia), northern Italy, and Lotharingia. From the reign of Otto onward, however, the emperors began to gain territories to the east of the Elbe River by offering the Christian dukes official titles in exchange for recognizing the emperor’s authority. This expansion happened in stages and peaked in the 13th century during crusades against the Slavs, who were principally led, under the encouragement of the emperor, by two monastic orders, the Livonian Brothers of the Sword and the Teutonic Knights, before the latter created their own independent state. This period was accompanied by a practice of colonization and Christianization in the lands situated between the Vistula and the Gulf of Finland.

Unlike its neighbors, the Holy Roman Empire never developed into a fully fledged modern nation-state. At the head of an eclectic group of cultures and powers, the imperial government was primarily symbolic and wasn't based on any lasting administration. 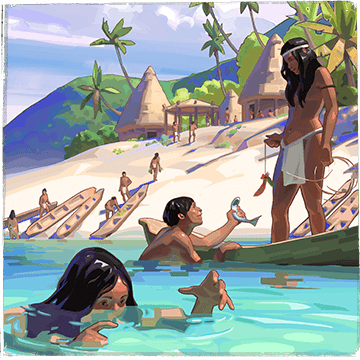