Tireless Spirit
+2 Industry per Workers on City or Outpost

A heritage born of fertile, humid lowlands with healthy harvests of corn and beans, the Mayans are bold explorers of the limits of sculpture, astronomy, and obsidian.

Developing from the 2nd millennium BCE and flourishing until the Spanish conquest in the 16th century, the Maya were a civilization of incredible longevity. Based in the Yucatán Peninsula, the civilization stretched as far as Guatemala and Honduras to the south and Tabasco to the north, comprising confederations of rival cities whose economies were based primarily on agriculture.

Maya culture flourished during what is called the Classical period (250-900), generally recognized as a golden age. Indeed, the Maya invented a very complex writing system based on the use of ideograms (hieroglyphics) and phonograms (phonetic symbols). They also had their own counting system that included zero, as well as an extremely accurate calendar system. Their astronomical observations enabled them to predict solar eclipses and even to calculate a synodic period of revolution for the planet Venus. The Maya also built monuments with spectacular architecture. Their cities had a mixture of pyramids and palaces linked together by raised walkways; their labor-intensive construction suggests a very strict social hierarchy. The rather simple facades were decorated with moldings and bas-reliefs in painted stucco. However, unlike the rest of Mesoamerica, they greatly emphasized the slope of their constructions so that some of their pyramids, such as those of Tikal, are over 70 meters tall.

Contrary to the popular idea spread through the cinema industry and reinforced by the Western eschatological view, the Maya calendar did not predict that the world would end on December 21, 2012. The Mayan Long Count calendar actually predicts the end of the fourth “world cycle” and consequently the beginning of a new cycle of 13 baktuns, i.e., approximately 5,125 years. 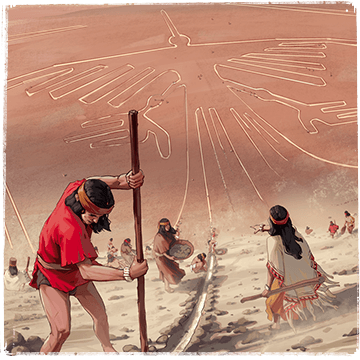