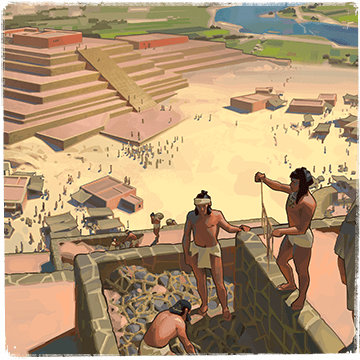 For the Caralans, urban life is born of the hard work of the farmer and the fisherman, ensuring none go hungry, whatever the season.

At the beginning of the third millennium BCE, the arid landscape of Peru’s Pacific coast saw the rapid and lasting development of Caral culture. Settled along the rivers running from the Andes to the ocean, its people constructed a complex and hierarchical society that lasted for over a thousand years. This culture flourished in a number of large urban centers, all distinguished by their stone architecture and monumental ceremonial buildings.

The Caralan culture takes its name from the eponymous site in the Supe valley, located some 150km north of the city of Lima. As the Americas’ oldest urban civilization, it is documented in at least thirty sites dating from 2900 and 1800 BCE that were scattered throughout the valleys of the rivers Fortaleza, Pativilca, Supe, and Huaura. This culture is notably characterized by the uniformity of its religious centers, probably used to maintain social cohesion among the various communities that it brought together.
Indeed, the Caralan culture was based on the ongoing exchange between two specialized communities whose food productions complemented one another. In the valleys, farming communities cultivated lands irrigated by the rivers, while at river deltas and on the coast, fishing communities ensured access to a protein-based diet. The combination of these activities enabled the Caralans to maintain significant yield surpluses, both in terms of agriculture and fish, and sustain a large, sedentary population in a semi-desert region.
The abundance of resources encouraged the emergence of a political and religious elite, capable of mobilizing large numbers of workers to build monumental pyramids in the centers of the largest urban settlements. Lining public plazas, these structures were the site of constant ceremonies in which maritime and agricultural sacrifices were offered up to the gods.

The production of cotton is a particularly good illustration of the intercommunity exchanges characteristic of the Caralan culture. Cultivated and most likely spun in the valleys, cotton was used, amongst other things, to weave fishermen’s much-needed nets. These elaborate nets may have made an important contribution to increasing fishing yields, thereby providing farming communities with greater access to fishing resources. 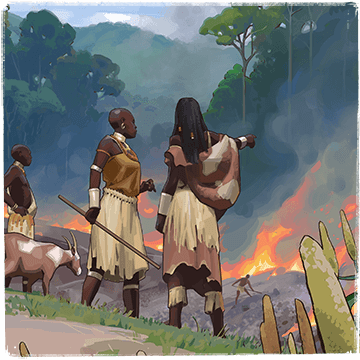 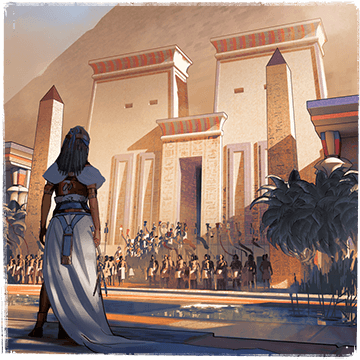