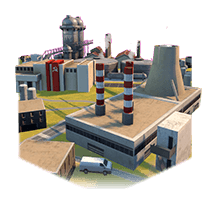 Over the course of the Second World War, the Red Army benefited from the combined skills of its military engineers and Soviet factories to design and subsequently mass-produce reliable, robust, and easy-to-use aircraft, tanks, and weapons. In the post-war period, this progress in the arms industry saw it rival the United States in many domains. Developed in Experimental Design Bureaus under the leadership of a generation of brilliant engineers such as Aleksandr Morozov, Mikhail Kalashnikov, Artem Mikoyan, Mikhail Gurevich, and Pavel Sukhoi, Soviet military equipment became renowned for its simple and robust design and was mass-produced and exported to many countries in the 1950s. The Soviet Union then prioritized investment in two areas that would have major repercussions on military technology and strategy: aerospace and nuclear science. The level of excellence achieved in these sectors saw the Soviet Union become a superpower during the Cold War.