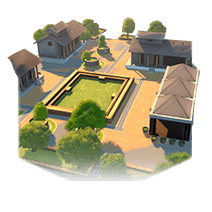 In these spiritual hermitages, typically sited near places of natural tranquility, travelers hone their minds and bodies.

In India, ashrams were originally sites dedicated to the study of Vedic philosophy. A small number of students would gather to practice intellectual, physical, spiritual, and sensorial exercises led by a master. Organized as communal and collective hermitages, ashrams convey a holistic approach to spiritual development and promote a lifestyle oriented toward simplicity. During India’s struggle against British colonial rule, Mohandas Gandhi founded several ashrams that became laboratories for an independent, self-determined, and politically aware way of life. Built on the tenets of pacifism and nonviolence, these ashrams were conceived as self-sufficient units that allowed their members to boycott textiles and food products imported from Britain. In recent decades, ashrams have become emblems of Hindu culture and spirituality, and certain establishments specializing in hosting foreign visitors on retreats are now an integral part of the Indian tourism industry.