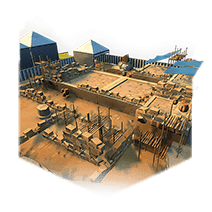 Excavating the architectural treasures of the past brings great insights -- and a worldwide audience.

The discoveries made during the French scientific expedition of 1798 laid the foundations for the development of Egyptology in Europe throughout the 19th century. Public and scientific interest in this new field of study were at the heart of the joint development of archaeological expeditions and cultural tourism in Egypt from the 1880s. These combined trends—heightened by the discovery of Tutankhamun's tomb in 1922—continued through the first half of the 20th Century, before gaining increasing momentum from the 1950s onwards. Encouraged by the Egyptian government and international research programs, numerous temples and sites were excavated, cleared, showcased, and made accessible to visitors. Simultaneously, a program of public and private investment funded the construction of hotel infrastructure in the Nile Valley close to the most prestigious sites. Consequently, the annual number of tourists visiting Egypt increased from 300,000 to 800,000 between 1962 and 1975.