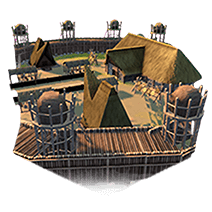 A Zulu military camp where warriors live and breathe the martial life, toughening themselves for the coming battles.

Beginning in the reign of Shaka, all male subjects in the Zulu kingdom were conscripted for military service. The Zulu military was organized around the ceremony of ukubuthwa, in which groups of young men (of 14 or 15 years of age) were gathered at regular intervals. These young men, now considered to be adults, were incorporated into regiments and joined military villages (kraal). Here, the young men (izinsizwa) were housed in huts (izindlu) made of woven branches covered with thatch and grass. They were instructed in the use of weapons and military strategy and were expected to repair and maintain their barracks. They could also be called upon to serve at the royal residence as guardians of the royal herd, messengers, to tend the royal crops, or to serve as a police force.