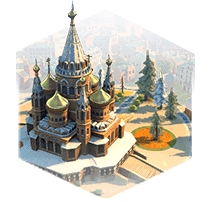 Important feasts throughout the year are celebrated by all the city's faithful at this grand cathedral.

During the second half of the 19th century in Russia, a new artistic and architectural style was flourishing known as “Neo-Russian.” This movement, which accompanied the development of Russian Romanticism and pan-Slavism, took its inspiration from historical and sometimes mythical references. In the architecture of cathedrals (собоp/sobor) this style was noted for its eclectic melding of Byzantine elements and motifs with others from the pre-Petrine medieval period. This can be seen in the famous Church of the Savior on Spilled Blood in Saint Petersburg, built on behalf of the imperial family, which took its inspiration from the distinctive shape of Saint Basil’s Cathedral in Moscow and the 17th-century churches in the Yaroslavl region. Similarly, Saint Michael’s Cathedral in Izhevsk, built at the turn of the 20th century, copies the belfries and bulb-shaped domes that are typical of 17th-century Muscovite churches.