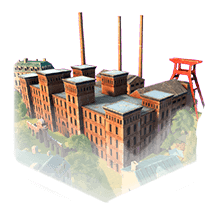 A vast crucible of heat and fire and smoke, many industries benefit in turn from the availability of high-quality coking coal.

The second half of the 19th century was a period of constant growth in Germany. The German territories, unified economically by the Zollverein and administratively by the Reich, and connected by thousands of kilometers of railroads linking cities to factories, saw the emergence of the first large, modern industrial plants whose production made the Empire the first industrial power in Europe. The importance of the resources extracted from the large mining areas and the presence of rivers and maritime routes resulted in Germany’s economic activities being concentrated around the Rhine. Large industrial facilities there included mines, coking works, and furnaces where the extracted ore was sent to be transformed into coke. Large quantities of coke, which have extremely high calorific properties, were used during the various stages of iron smelting: first to make cast iron and then steel.