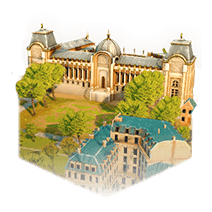 In this grand palatial building, housing exhibitions like the world fair, citizens can see a dizzying array of new inventions.

The emergence of universal expositions (World’s Fairs) in the second half of the 19th century provided a public showcase for innovations in science, technology, and industry—fields that were flourishing at the time. Against the backdrop of national rivalry, these exhibitions were a chance for industrialized nations to display their peoples’ engineering achievements. From 1851 to 1900, five of the thirteen world expositions were held in Paris. For each, the French capital erected monumental exhibition buildings such as the Palais de l’Industrie (Palace of Industry) in 1855; the Champs de Mars palace, which was dismantled after the 1878 world fair; and the Grand Palais in 1900. Large roads such as the Champs-Élysées were opened up for exhibitors and millions of visitors, and the Eiffel Tower was erected in line with the Trocadéro Palace for the Exposition Universelle in 1889 to celebrate the centenary of the French Revolution.