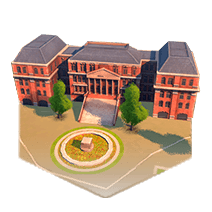 With architectural flourishes matched by interior luxury, the office is a symbol -- and creator -- of colonial wealth in vassal territories.

Queen of the United Kingdom of Great Britain and Ireland, Victoria was also the queen of Canada, Empress of India, queen of Australia, and protector of the overseas territories. The colonies, in development since the 16th century and expanded under her name, counted over 400 million subjects at the time of her death. The management of her overseas dominions was ensured by the Colonial Office, a ministry dedicated to all colonial matters. In 1858, following the Indian Rebellion, management of the British Raj and all of the Asian colonies was separately managed by the India Office. Based on the system of indirect rule, the Empire adapted its forms of governance to better suit the local context. Those colonies inhabited by a majority of British colonial subjects, therefore, soon developed semi-autonomous political structures, while most other British possessions would not be given this freedom.