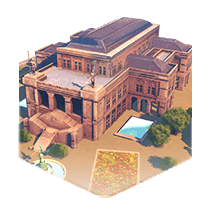 The second half of the 18th century was the high point in the Viennese classical era or First Viennese School. The highly refined symphonies composed by Haydn, Mozart, and Bach would inspire the work of several generations of Romantic composers in the 19th century. At this time, the world of music was shaken up by profound changes taking place in Viennese society. Vienna was a leading industrial and financial center endowed with the title of imperial capital and home to a powerful bourgeoisie with a great love of music. While earlier musicians had composed for the princes or religious institutions that employed them, Schubert, Strauss, Brahms, and Mahler could choose from among a profusion of theaters, salons, and private concert halls for their musical performances. With approximately 2,000 seats, the imposing Wiener Hofoper opera house, inaugurated in 1869, provided these artists with an even larger audience.