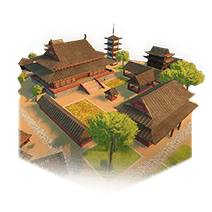 When Buddhism was first introduced to Japan from China in approximately the sixth century, it merged with the existing religion of Shintoism to form a syncretic belief system. The most interesting aspect of this phenomenon is the way in which the two religions managed to coexist in Buddhist temples (tera/dera) which were associated both with spirits (kamis) and with Shinto shrines (jinja), many of which were dedicated to Buddha. However,during the 17th century, Tokugawa religious policy brought in changes: the administrative structure gradually became more powerful and exerted greater control over its territories. From the 1650s onward, Buddhist centers began to be used to control the religious practices of the population in an attempt to fight the rise of Christianity. Every person in Japan was obliged to provide written proof from an authorized temple stating that they were not Christian. Buddhist monks (bonzes) kept this information in religious registers throughout the entire country.