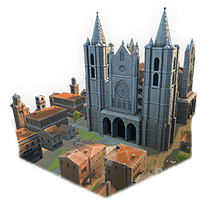 Often taking more than a century to build, the soaring majesty of the cathedral invokes religious awe.

The 11th- to 15th-century conquest of Al-Andalus by the Spanish Catholic kings saw a major process of rebuilding and transforming places of worship. Churches and cathedrals were erected in the place of mosques and built in accordance with Gothic architectural principles, which gradually evolved into a particular style known as Isabelline Gothic or Castilian late Gothic. This blended elements of the Mozarab and Flemish architectural schools and was perfected under the reigns of Isabella I and Ferdinand II (1474–1516). The new cathedrals usually followed the original layout of the Islamic monuments they replaced, thus breaking away from the traditional square floor plan while gaining height through the use of arches, pillars, and spires borrowed from Gothic architecture. The buildings designed by Juan Goas, such as the Monastery of San Juan de los Reyes or the Palacio del Infantado, are good examples of this intermixing of styles.