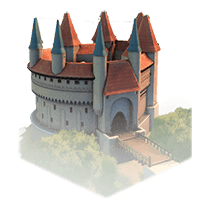 Eclipsing mere gates in city walls, the manned barbican offers protection for the surrounding quarters of the city.

The barbican is the name of a type of fortified building typically found in Polish towns. Part of wider network of city fortifications, it served to protect a passageway (postern, city entrance, etc.), providing cover for soldiers when they performed an offensive sortie as well as when retreating. The most well-known barbican is probably the one in Krakow, which protected a bridge leading to the city gates. Built in 1498 in the Gothic style, it consisted of a round fortress 25 m in diameter topped by seven watchtowers and is surrounded by a ditch that connects to the city’s moat. The three-meter thick walls were designed to withstand enemy artillery fire, while its arrow slits and machicolations allow the city’s defenders to fire on the enemy.