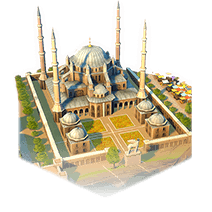 With schools, kitchens, and baths as part of its monumental architecture, the sultan camii is far more than a place of prayer.

The term külliye describes an architectural complex of buildings, centered around a mosque, devoted to teaching, health and hygiene, and community life. The construction of these complexes was generally part of a policy designed to boost the sultan’s prestige in the empire’s larger cities. The presence of law and theology schools headed by ulamas in the various külliye in Bursa, Edirne, and Istanbul made them an important recruitment channel for the Ottoman administration. They produced officials in charge of religious, judicial, and civil matters, the cadis, and some heads of chancellery. Permanent donations paid for the running costs and building maintenance costs as well as the teachers’ salaries. This ongoing revenue also covered the costs of religious charity services, such as hospices and hospitals, which were also located inside the külliye.