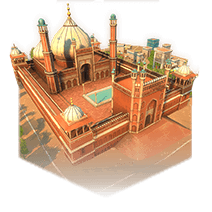 This grand set of tombs holding the mortal remains of the empire's great heroes never fails to inspire every Mughal.

The great mosques (Jama Masjid) are a powerful sign of the ability of Islamic rulers to bring their subjects together for collective Friday prayers. These imposing symbols of power were adopted by the Mughal leaders, who competed with each other over the centuries by building monuments of increasingly gigantic proportions in their capitals. The great mosque of Delhi, which remains one of the largest on the Indian subcontinent, was built at the same time as the capital of Shahjahanabad. This jewel of Mughal architecture blends together several key design elements: the terrace, the monumental gate (pishtak), and the bulb-shaped domes characteristic of central Asian building design, and borrows elements from the façade of the Jama Masjid in Fatehpur Sikri as well as its floorplan. Decorated in marble and red sandstone, it was designed to receive all of the new capital’s inhabitants for prayers and can still contain more than 25,000 worshipers today.