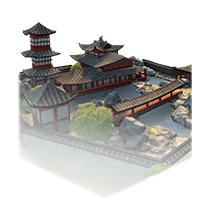 A place of great tranquility, beautiful craftsmanship, and soothing aromas, perfect for the exchange of ideas.

Many medieval Chinese sources attribute the introduction of tea in China to the mythological hero Shennong. Grown on the country’s less fertile hillsides, tea soon became used in beverages and dishes that were enjoyed by emperors, priests, and commoners alike. The Ming Dynasty marked a period of profound change in the way that people consumed tea. A preference for infusions that used whole tea leaves rather than tea powder introduced new utensils, such as the tea pot, to the wider population. The cultural elite codified a very strict set of rituals that dictated the way they drank their tea. Those who had been educated according to these principles had to be able to identify the flavor and origin of each variety while expressing deep contempt for teas infused with flowers, which were very popular in society at the time.