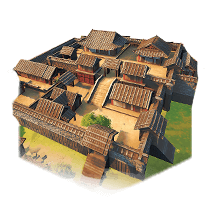 In the courtyards and corridors of the seowon, young Koreans from aristocratic families study for civil examinations.

The seowon, which appeared in Korea during the Joseon Dynasty, were academies dedicated to the study of philosophy, ethics, and politics. These schools were created to teach the ideas of neo-Confucianism, a offshoot of Confucian philosophy. The first seowon was founded in honor of An Hyang, who was the first Korean neo-Confucian philosopher. They were built close to mountains and rivers, in sites where students could enjoy nature and gain a better understanding of natural laws. Through contemplation and the study of literature, scholars would try to understand the universe and the people in it. Seowon education covered the main precepts of neo-Confucianism: self-discipline, steadfastness, and self-improvement. The seowon were an important place for the dissemination of scientific knowledge. Local nobility and intellectuals would gather here to debate social problems and state affairs.