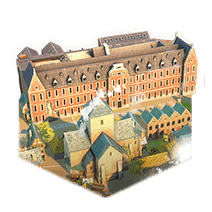 Overlooked by administrators' offices, the warehouse floor is stacked high with imports and is a riot of colors and smells.

The 15th century boom of the spice trade was made possible thanks to the construction and maintenance of commercial infrastructure along the maritime routes connecting Europe to the Indian subcontinent and Southeast Asia. The Dutch East India Company had a network of forts, ports, and warehouses throughout the Indian Ocean, which formed the basis of its power in the 17th century. The Vereenigde Oostindische Compagnie (VOC) was established in 1602 by the States General of the United Provinces of the Netherlands who granted the company a monopoly on trade in the Indian Ocean. Based on this, the VOC was allowed to conquer territories in order to build the infrastructure it needed for trade and supply. Private capital was raised to arm the company’s merchant fleets through shares issued on the Amsterdam stock exchange. Shareholders received a portion of the profits when the fleets returned to Europe.