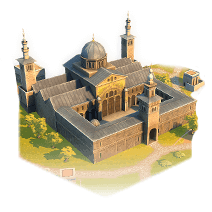 A stunning blend of arcades, minarets, and arches surround a central courtyard where thousands may worship.

Mosques are special communal meeting places in the Muslim world. At the beginning of the spread of Islam these were modest buildings in city centers. A process of rebuilding and expanding these early places of worship began at the end of the 7th century, when the stabilization of the Empire led to the growth of the Muslim community. In major urban centers, the grand mosque was the preferred tool for asserting the caliphate’s authority. Worshipers would meet in these buildings every Friday to listen to a sermon given in the name of the Leader of the Faithful. With its monumental architecture and the splendor of the mosaic frescos that decorated it, the Great Mosque of Damascus was often described in classical sources as the most beautiful in the Islamic world. For this reason, many of its characteristics were copied, notably in the design of the Grand Mosque of Cordoba.