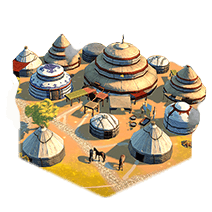 From the thrum of training bows to the babble of the bazzar, the orda carries all the sounds of their sibling cities.

Similar to the Turkish ordu, orda, Mongolian for horde, refers to a camp and by extension a clan or seat of power. Various sources from this period describe these camps as mobile tent complexes (in Mongolian: a ger) made of animal hides or felt stretched over wooden frames that were easy to pack up and carry. Some of these, such as the royal tents, were mounted on chariots pulled by oxen. The camps were in constant migration in search of new pastures, but also during times of war, where they were used as a secondary base for the army. Later the term came to refer to larger political structures such as the Golden Horde, which collected tributes from Russian towns in the second half of the 13th century until the start of the 15th century. To this day, the word “orda” is synonymous with a seat of power in the Mongolian language and appears in the name for the Government Palace.