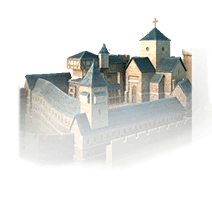 From the minds of English stalwarts, ever more devious means of defending the lands are born and trialed here.

Following his coronation in 1066, William the Conqueror immediately gave the order for construction to begin on the first buildings of the Tower of London. This marked the beginning of a significant construction program of fortifications throughout the kingdom. Intended to display the power of the Norman rulers, they also served as residences for the nobility and became an important symbol of feudal society. These strongholds were mostly wooden towers protected by palisades and built over an artificial mound of earth or “motte.” These motte-and-bailey castles were built by unskilled laborers using abundant, easy-to-find materials. During the 12th century they were replaced by stone castles of the same design before gradually being converted into fortresses during the 13th century. They were more resistant to projectiles thanks to their round towers, and their more compact design was better adapted to the increasing use of artillery.