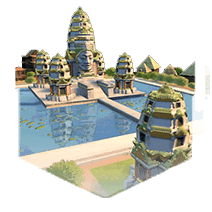 Some say these vast artificial lakes symbolize the Sea of Creation; what's indisputable is the boon on their shores.

The city of Angkor, built on the shores of the great lake Tonlé Sap, received its water supply from the peaks of Phnom Kulen down the Siem Reap river. The Khmer architects took advantage of this abundant water supply by building a number of reservoirs, or baray, in the city that fed into a vast water system. The baray varied in size depending on the particular region and site, had packed earth walls, and were usually rectangular in shape. The two largest reservoirs in the Angkor region are situated on either side of the fortified town of Angkor Thom. They measure 16 and 12.5 square-kilometers respectively and contain up to 50 million cubic meters of water. These were connected to rice paddies via irrigation channels. The rainwater collected during the monsoon season would be used for irrigation during the dry season.